Ex UN Peacekeeper 1994 Land Rover Defender 110 LHD with factory original 200TDi engine that served in Bosnia. Covered 186,646 Km (116,654 miles) since new.
1994 was a cross over year, and this is one of the last Defenders that left the factory with a 200TDi powerplant as a special-order unit. UN specifically ordered a well-tested, highly reputable and reliable 200TDi over a newly introduced 300TDi in 1994 which was yet to prove its reliability qualities to the world.
This Defender 110 served in a Peacekeeping mission conducted by the UN in Bosnia during the 1990s. The newly independent countries of Serbia and Croatia fought for territory and influence in the land that separated them, Bosnia-Herzegovina, initiating a brutal war that raged for much of the first half of the 1990s. In early 1992, the United Nations established in a peacekeeping force, the UN Protection Force (UNPROFOR), to provide security for the flows of humanitarian aid that were flowing into Bosnia from the international community. The UN tried to take a more active role by establishing “safe zones” under international protection in the capital of Sarajevo, Goradze, Srebrenica, and a few other locations. But Serbian forces overran the safe zone at Srebrenica in 1995, massacring more than 7,500 people in what many have called “worst atrocity in Europe since World War II”. Even the presence of UN forces could not prevent this terrible act of violence from occurring. The Srebrenica massacre changed the international community’s relation to the Bosnia War, and NATO responded by initiating more aggressive military air strikes against Serbian forces around Sarajevo. Hostilities began to wind down at the end of 1995.
Solid chassis and bulkhead, updated interior, low mileage, all body panels are in great condition, very well preserved D110!
Great daily driver or overland adventure vehicle. This Defender has been completely restored in 2019 under previous ownership, some restoration pictures can be seen in gallery bellow.
Restoration work done under previous ownership in 2019 at 162K Km:
Additional work performed by Xerbera:
Walk Around Video: https://youtu.be/PpSymCzFecQ
Driving Video: https://youtu.be/qepvw3k95t0

*Before we begin auction listing process, feel free to contact us with your offer.

Need Financing?
Back to All Vehicles 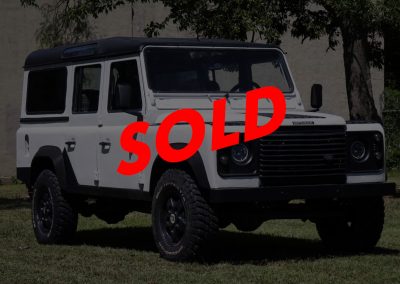