The LS3 is filled with components designed for high performance and longevity. The aluminum block is filled with a sturdy reciprocating assembly that combines with L92-type rectangular-port heads to deliver a 10.7:1 compression ratio. As the standard engine in the fifth-generation Camaro SS and C6 Corvette, the high-revving, deep-breathing LS3 6.2L is poised to go down in history as one of Chevrolet’s best and most versatile engines. 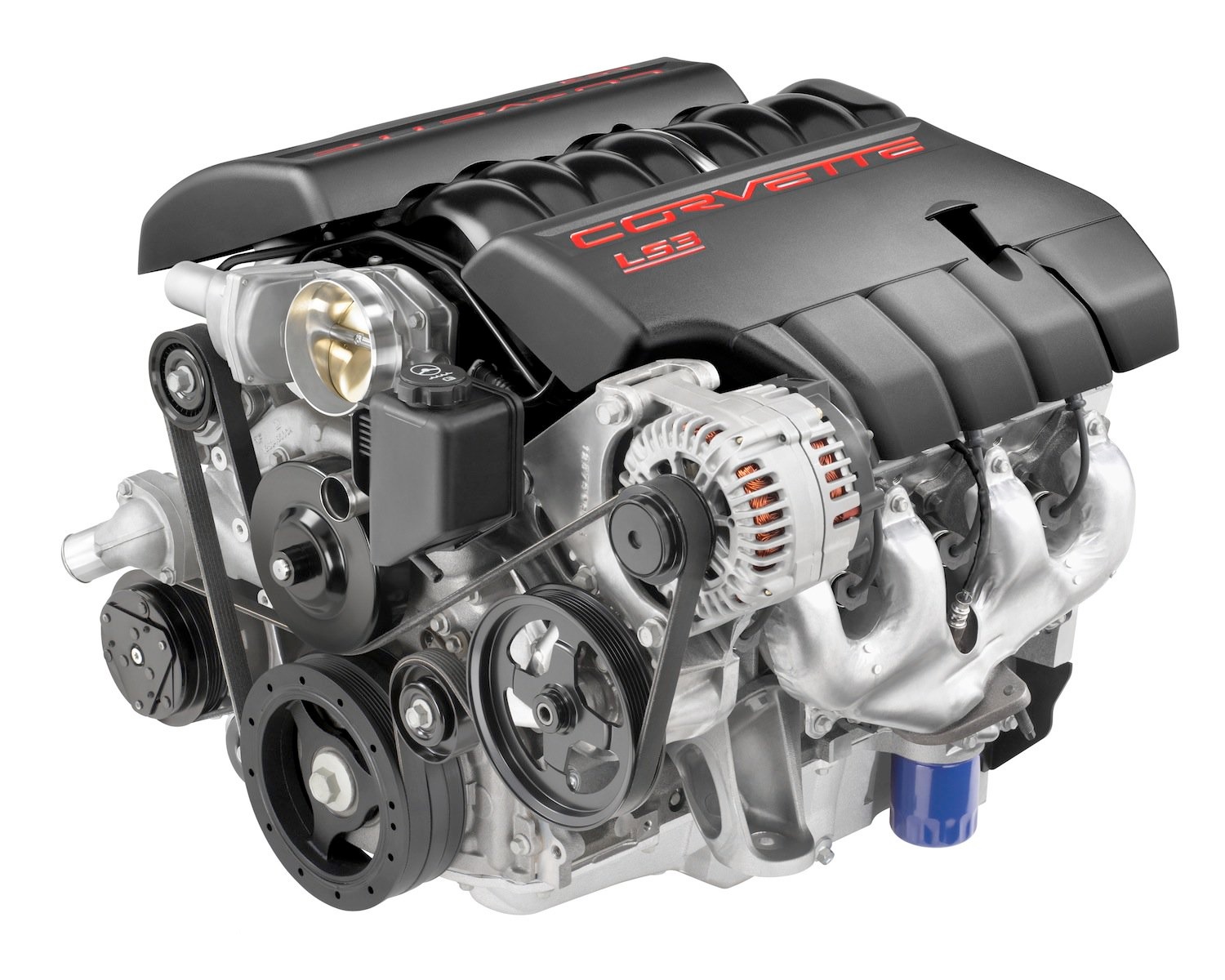 The LT1 is architecturally similar to the LS family of engines, but with a unique block casting, cylinder head design, oiling system and more. The LT1 is offered with a wet-sump or dry-sump oiling system. Introduced on the seventh-generation Corvette Stingray, the LT1 6.2L opened the next chapter in the long, historic legacy of the Small-Block engines.

The 5.3L is powerful, but delivers exceptional refinement to go with great strength. Quiet features built into the engine are complemented by an improved engine cradle and mounting system. These help reduce vibrations transmitted through the chassis and into the passenger compartment.

The LV3 V6 engine is produced by General Motors for use in pickup trucks. It is part of GM’s 5th-generation Small Block engine design that’s named EcoTec3 in pickup trucks, replacing the 4th-generation Small Block engine family known as Vortec. The launch of the EcoTec3 engine line, including the 4.3L V6 LCV, coincides with the launch of the all-new 2014 Chevy Silverado and 2014 GMC Sierra. The 4.3L V6 LV3 is based on the V8 versions of the Gen V family, but with two fewer cylinders – a design lineage that dates back to the previous 4.3L V6, which was itself a Gen-II small block with a pair of cylinders removed. 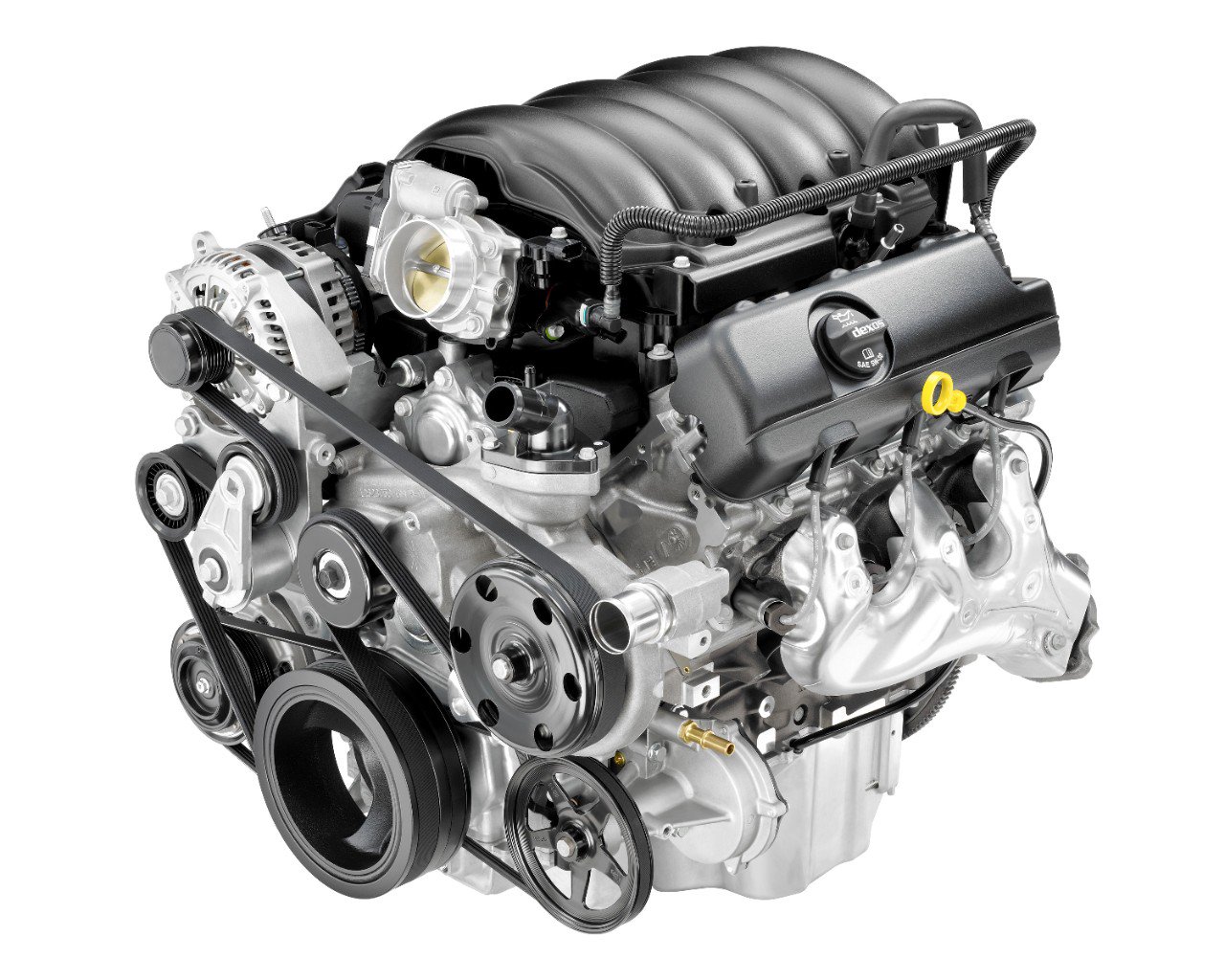 Big Torque Chevy 6.3L Small-Block 383 Stroker
When it comes to cranking serious torque from the classic Small-Block, it’s hard to beat the 383 stroker combination, which uses a long, 3.800-inch stroke with 4.005-inch bores to generate exceptional low-end pulling power and surprising high-rpm horsepower.
Super Small-Block – It features lightweight aluminum cylinder heads based on the proven Fast Burn design, with large intake runners and 2.00/1.55-inch valves. Beehive-style valve springs enable great high-rpm performance and durability, allowing the SP383 to rev higher and build more horsepower.
As with any “stroker” engine, the 383 stroker uses an altered crankshaft to increase the stroke of the pistons. This increased stroke allows you to get more air and fuel into the cylinders, thus increasing displacement without changing engine blocks. The increased fuel and air means more horsepower and torque!
The Chevy 383 Stroker is an 8 cylinder engine that uses the popular production Chevrolet 350 block and a slightly altered Chevrolet 400 crank. A stock 350 has a piston stroke length of 3.48 inches.
The 400 crank changes the 383 to a total stroke of 3.75 inches. This produces a total displacement of 383 cubic inches (thus the name 383). This displacement means that a Chevy 383 Stroker is capable of drawing in a total of 383 cubic inches of air/fuel mixture into it’s cylinder chambers during one cycle of the 8 pistons. 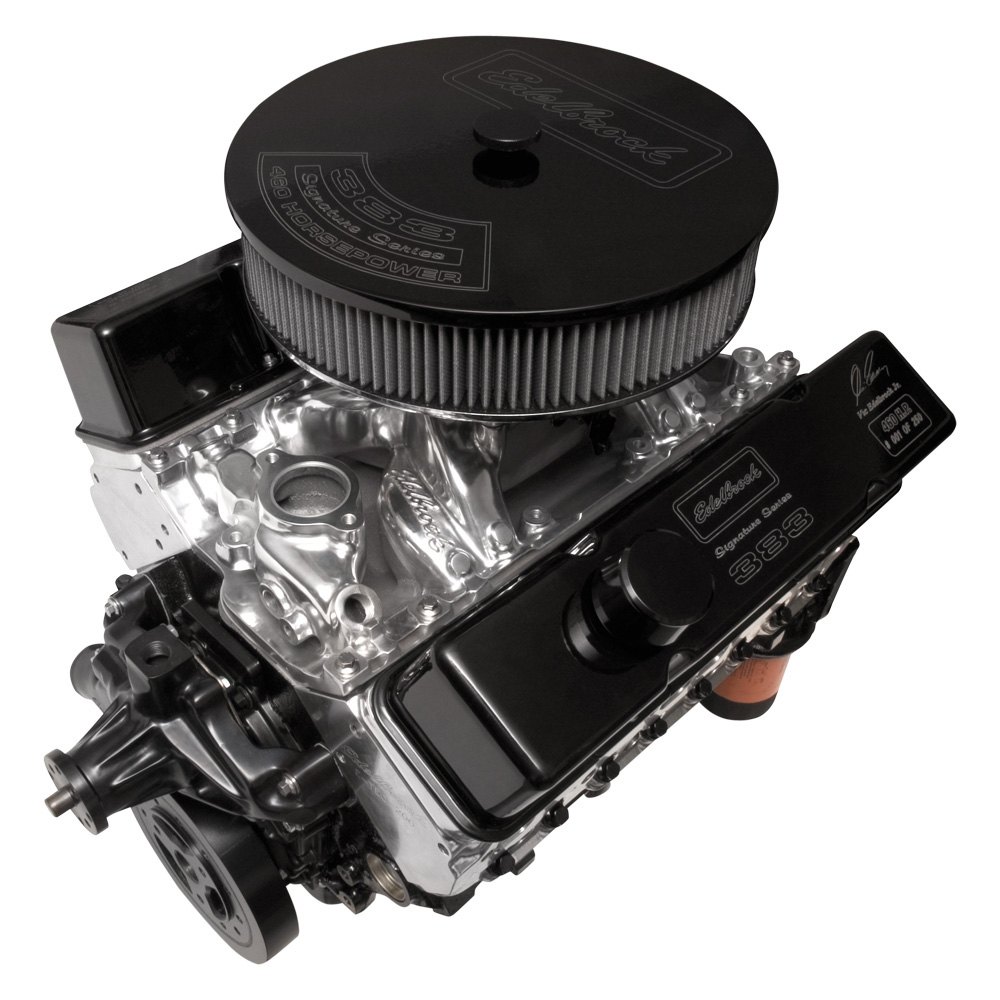 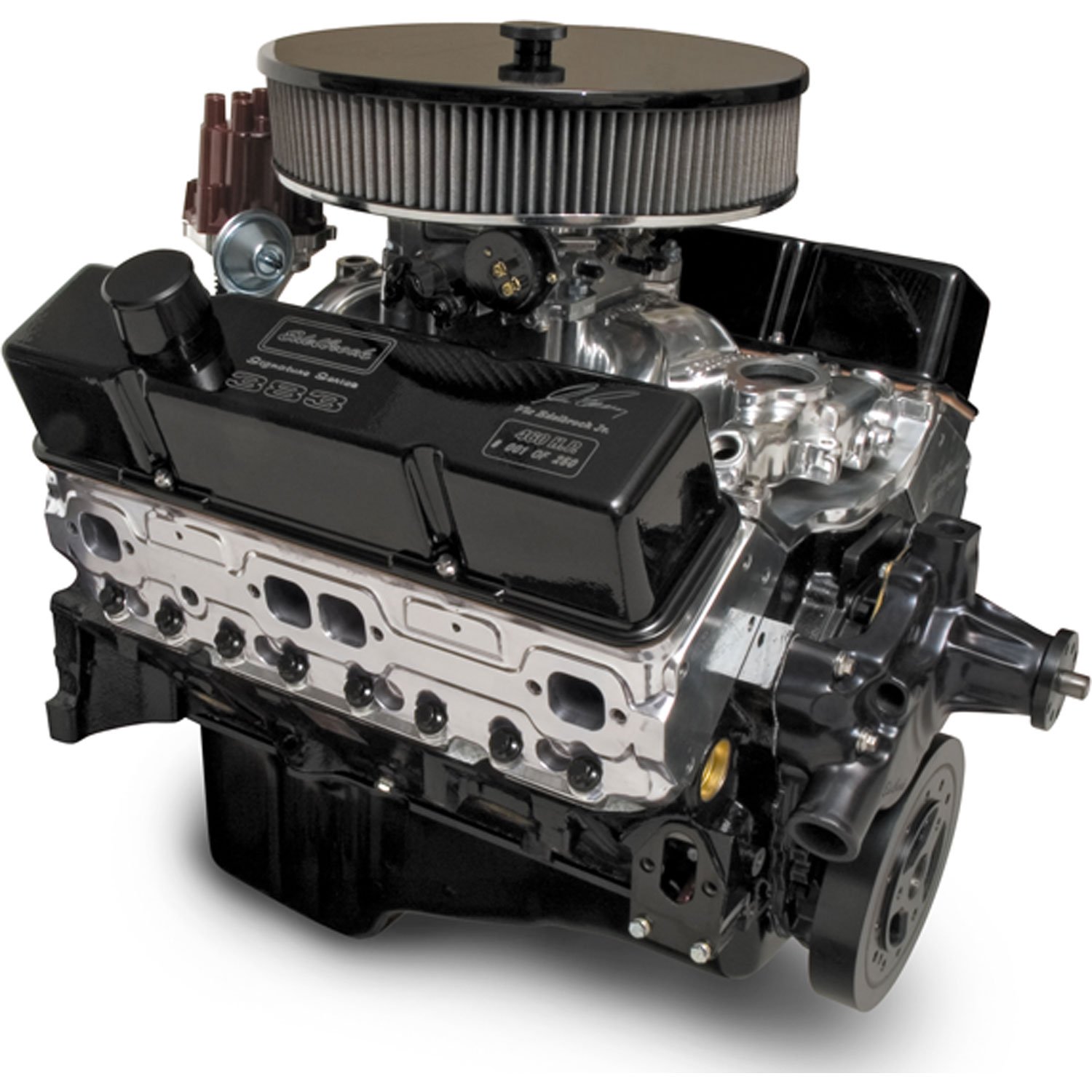 Chevrolet 5.7L V8 Small-Block 350 Crate Engine
POWER, DURABILITY & AFFORDABILITY IN THE CLASSIC SMALL-BLOCK 350
As the latest in Chevrolet Performance’s Street Performance crate engine lineup, the engine is designed as an affordable performer to match just about any budget. Better still, it uses stronger components and modern technology to make it a better alternative to rebuilding.
Based on the value-driven 350 HO crate engine, our engineers swapped the flat-tappet camshaft for a hydraulic roller and added the latest Small-Block intake manifold design. Together, they help build more power across the rpm band – from 195 to 357 horsepower and up to 407 lb.-ft. of tire-turning torque.
The engine leverages the strength of a strong rotating assembly secured in a brand-new block with four-bolt mains, along with economical Vortec iron cylinder heads. It’s a durable assembly designed to offer years of high performance excitement at an excellent value. 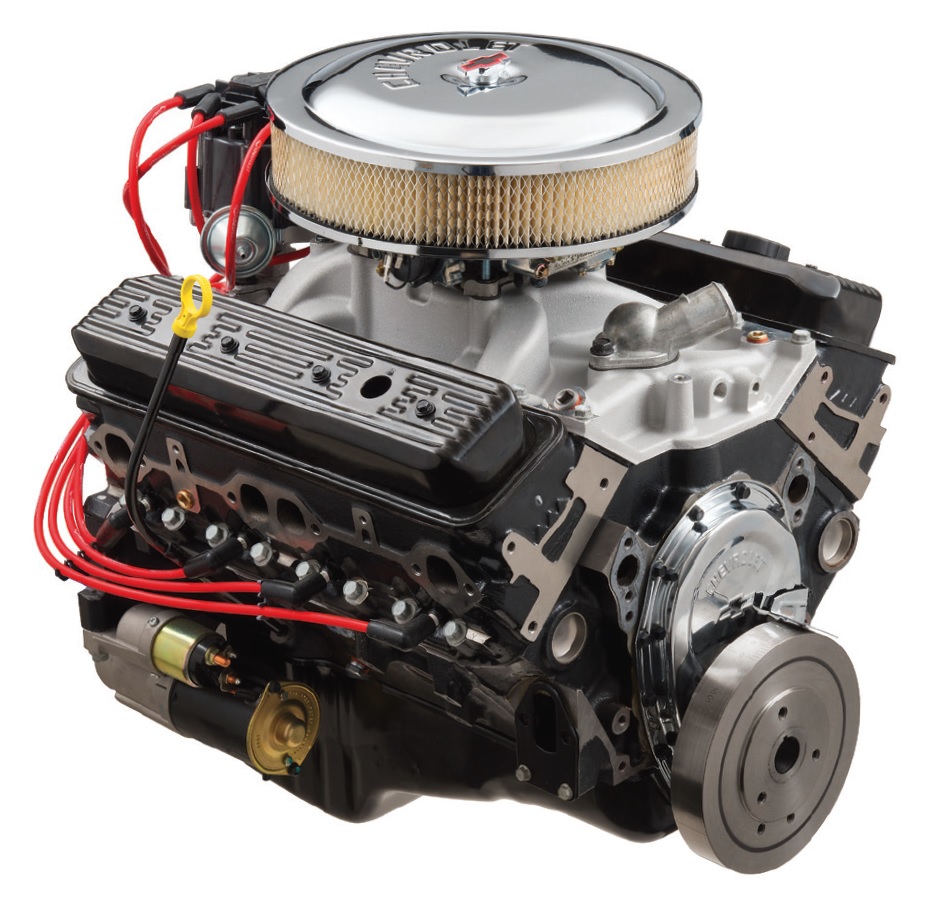 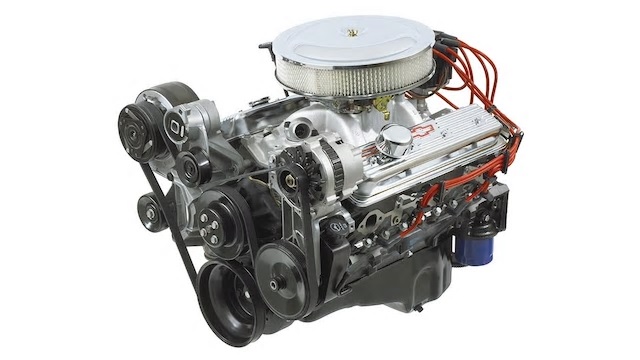 The R2.8 turbo-diesel engine is the ISF2.8 four-cylinder diesel engine, the smallest and lighter engine out of the ISF engine family. The Cummins ISF2.8 is the modern engine that combines two main qualities – the power and compactness. The Cummins R2.8 engine has cast iron cylinder block with sleeves, which could be replaced. That results in less material consumption and higher strength. The simple and cheap material provides low cost, reliability and repair possibility.

The engine has the high-end technology fuel system – electronically controlled Common Rail fuel injection. The high-pressure fuel pump is mounted on the front end of the engine. It is driven by camshaft through the gear. The ISF2.8 has turbocharger HE 200 WG without an intercooler. The engine is equipped with start-up relief devices at low temperatures. An electric spiral is provided for heating the air in the intake manifold. 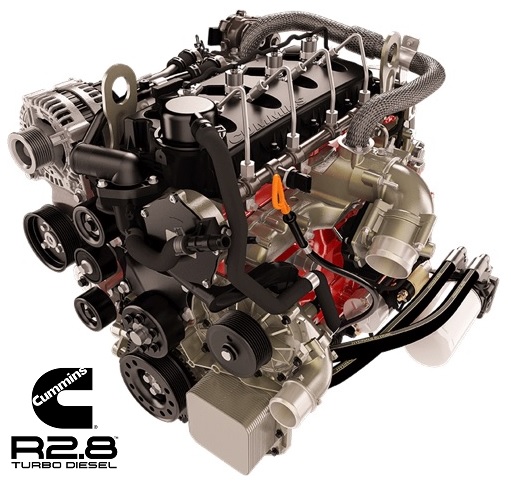 If your Defender has a 2.5L Petrol or 2.5L NA Diesel in the engine bay, it is highly likely that you will find both of these engines to be very weak and lacking power.

We offer an economical engine swap solution to address your engine performance concerns with fully rebuilt 200TDi or 300TDi engines.

Over the years, Land Rover 200TDi and 300TDi Turbo Diesel engines proved to be the most reliable and long-lasting engines if properly maintained and driven and both are capable of more than 400K miles. This is the reason they are sometimes referred to as bullet proof engines. 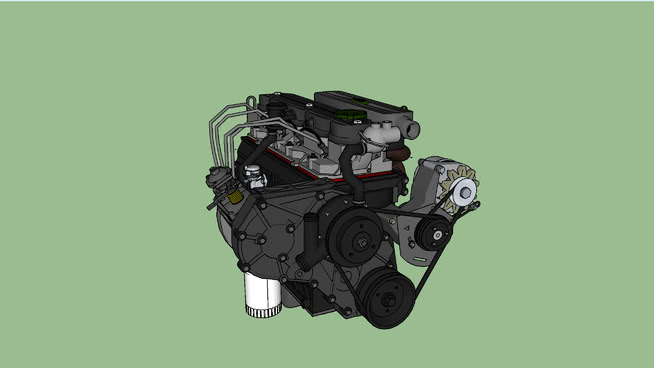 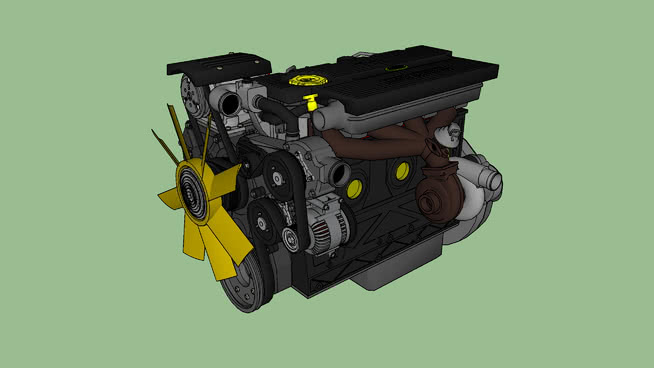 Introduced in late 2005 to become the 6-speed replacement for the 4-speed transmissions such as the 4L60E. The early release of this product line was introduced in Cadillacs and Corvettes, but before long it became mainstream for GM’s light duty pickup and SUV lines.

The Hydra-Matic 6L90E is a six-speed automatic transmission produced by General Motors for use in rear-and rear-biased all-wheel-drive vehicles with a longitudinal powertrain orientation. Developed in-house by General Motors, the Hydra-Matic 6L90E is part of the 6LXX family of fuel-saving, electronically controlled six-speed automatic transmissions that succeeded the 5LXX family.

The modular design of the Hydra-Matic 6L90E is shared with variants rated for different torque levels to accommodate various engines and vehicle applications. All versions share a unique output gearset configuration that enables it a wider range of ratios than a conventional planetary gearset automatic transmission. This allows the transmission to be tailored for optimal fuel economy while delivering excellent acceleration traits. The wide overall ratio spread of 6.04:1 allows a “steep” first gear, as well as a very “tall” overdrive top gear for low-rpm highway cruising.

For performance cars, muscle cars and hot rods, TREMEC is a natural choice for a manual transmission. The TREMEC TR-4050 has an advanced synchronizer/shift system that provides smooth shifting, short, precise throws and a driving experience unmatched by any other heavy-duty 4wd transmission in its class. The TR-4050 is also a desirable length for short-wheelbase 4x4s. A short overall length provides better driveline angles. A long transmission/transfer case combo reduces rear driveshaft length and can create driveline angle issues.
Overall, the TR-4050 provides an essential option for a market that has been neglected. The TR-4050 is a proven design that has been in production since the early 1990s. A rugged, die-cast, aluminum-alloy case forms the foundation. The gears have a high-contact, constant-mesh, helical design for maximum strength It has a torque-handling capacity of up to 425 lb-ft on a working GCVW of more than 15,000 pounds. For increased internal stability under load, the input, main and counter shafts feature tapered roller bearings. A counter-shaft–mounted 5th gear synchronizer improves noise, vibration and harshness in overdrive.
With gear ratios of 6.16 first, 3.11 second, 1.71 third, 1.00 fourth and .76 overdrive fifth, the TR-4050 is more capable than either the NV4500 or NP430 transmissions at off-road use, while still being capable of highway and everyday driving. Single- and double-cone synchronizers give the driver silky-smooth shifts. If PTO capability is needed, the TR-4050 has a standard, right-hand, six-bolt PTO hookup.
The TR-4050 can be mated to a multitude of engines: Cummins 4BT, 6BT, 5.0 and R2.8 Turbo Diesel; Ford Windsor small-block and Coyote; small- and big-block Chevy and LS Series; and small-block Mopar and Gen III Hemi. It’s an ideal replacement for the AX15, NV3500, NV3550 and NV4500 5-speeds, as well as NP435A, NP435L, NP435D, NP435E, T18, T19, T98, SM420 and SM465 4-speeds.
8-Speed ZF 8HP70 Automatic Transmission
Innovation by reduction: efficiency, perfected
With the development of the new 8-speed automatic transmission by ZF, the focus was not on the number of speeds but rather on the minimization of fuel consumption. The new 8HP 8-speed automatic transmission, which was designed to be more lightweight, sets new standards for flexibility, efficiency, and economy. It is an excellent example of how the power of innovation can create a new classic design. 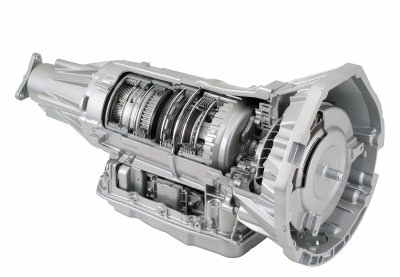 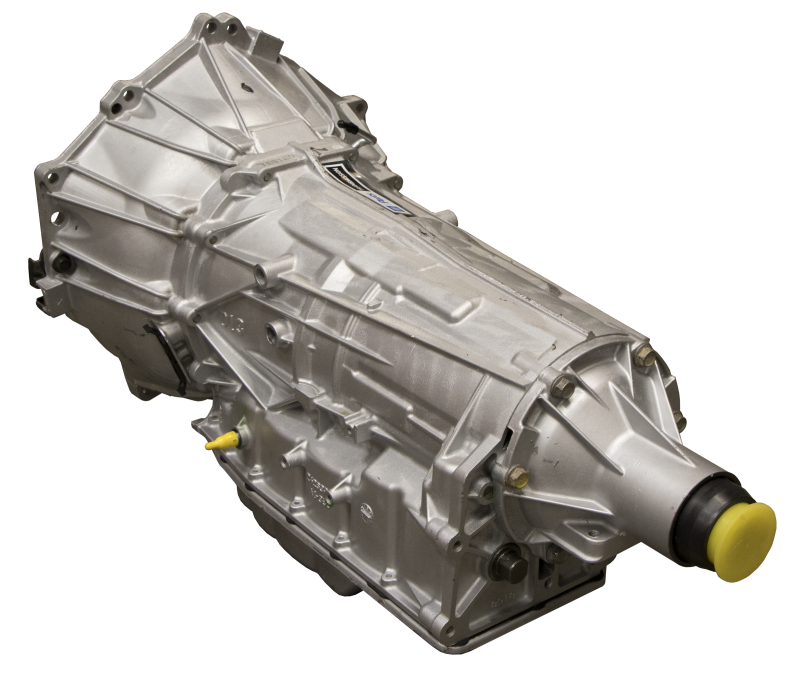 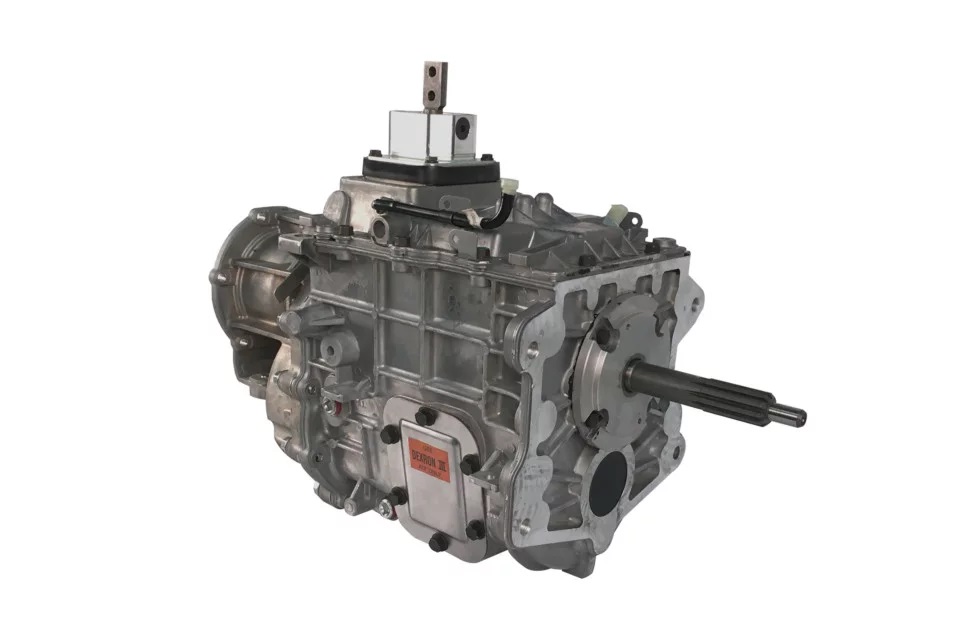 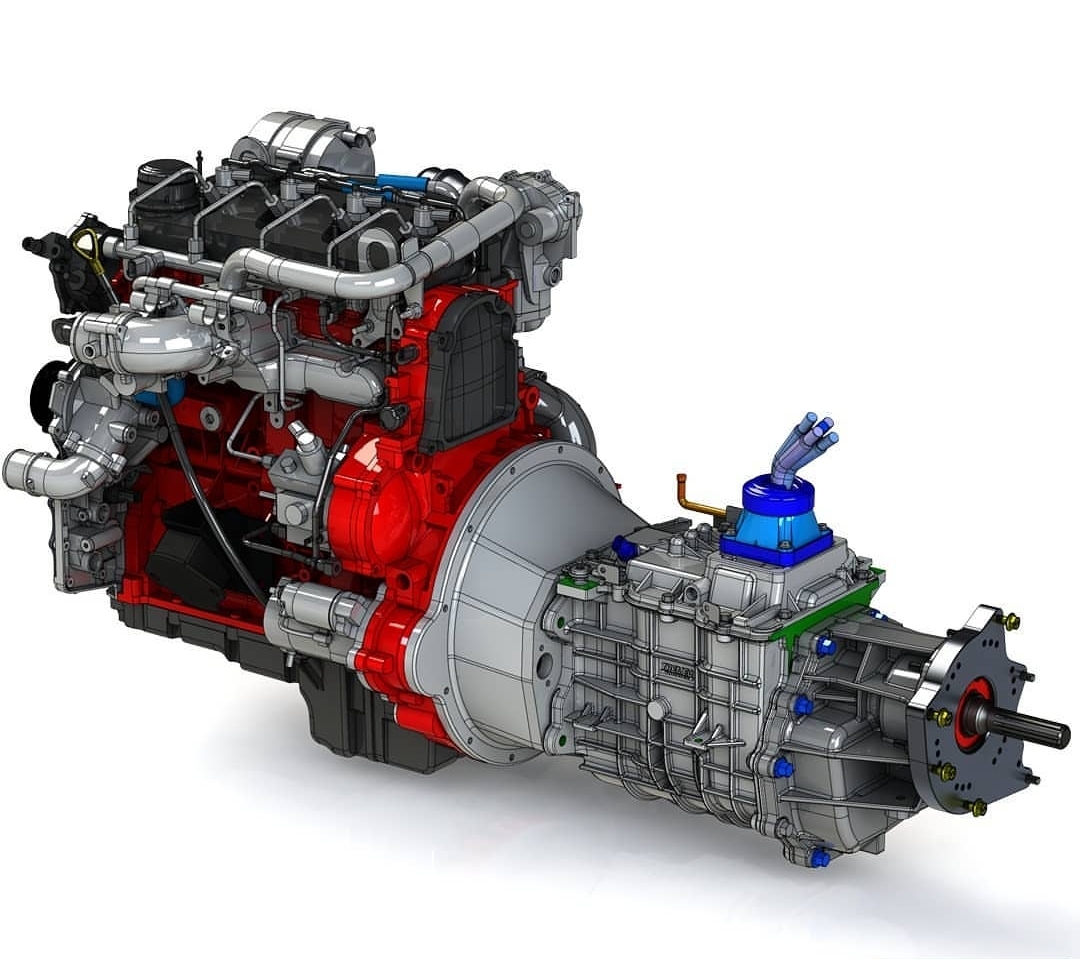 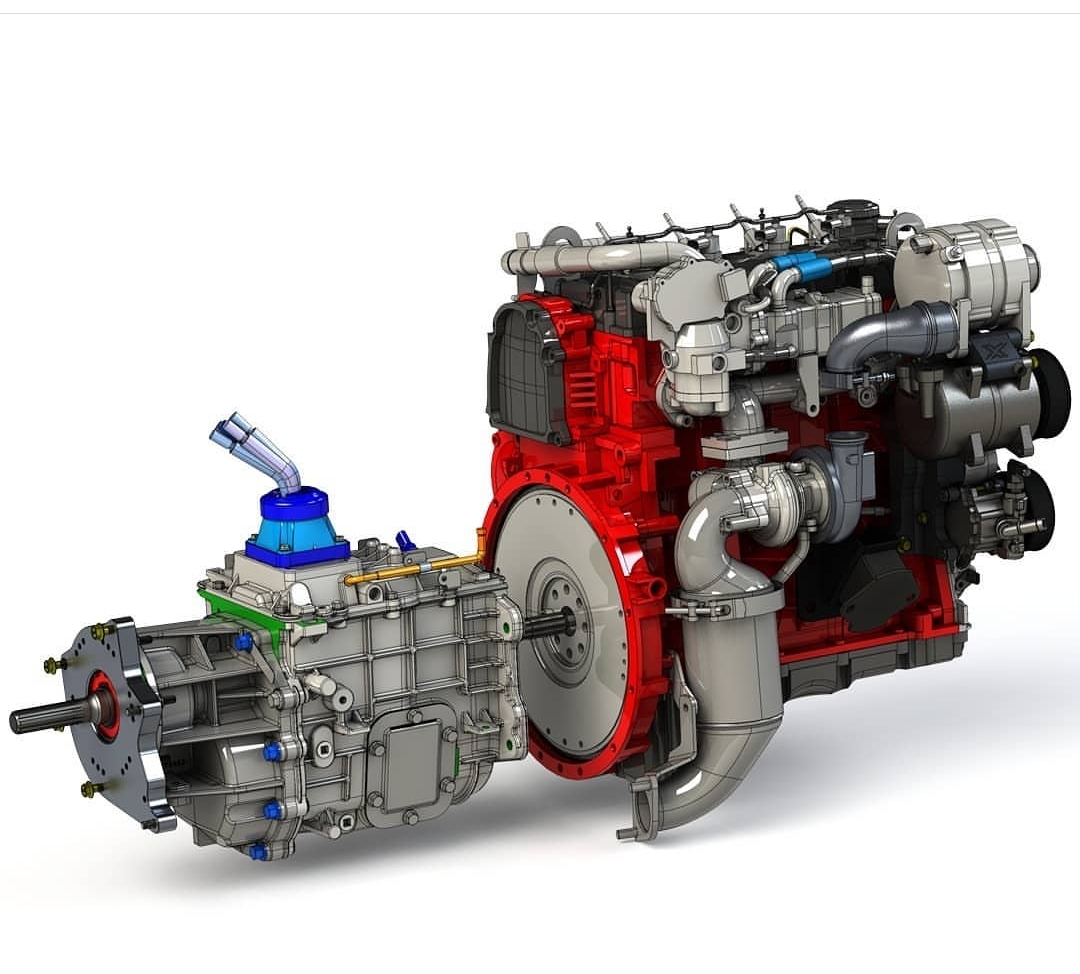 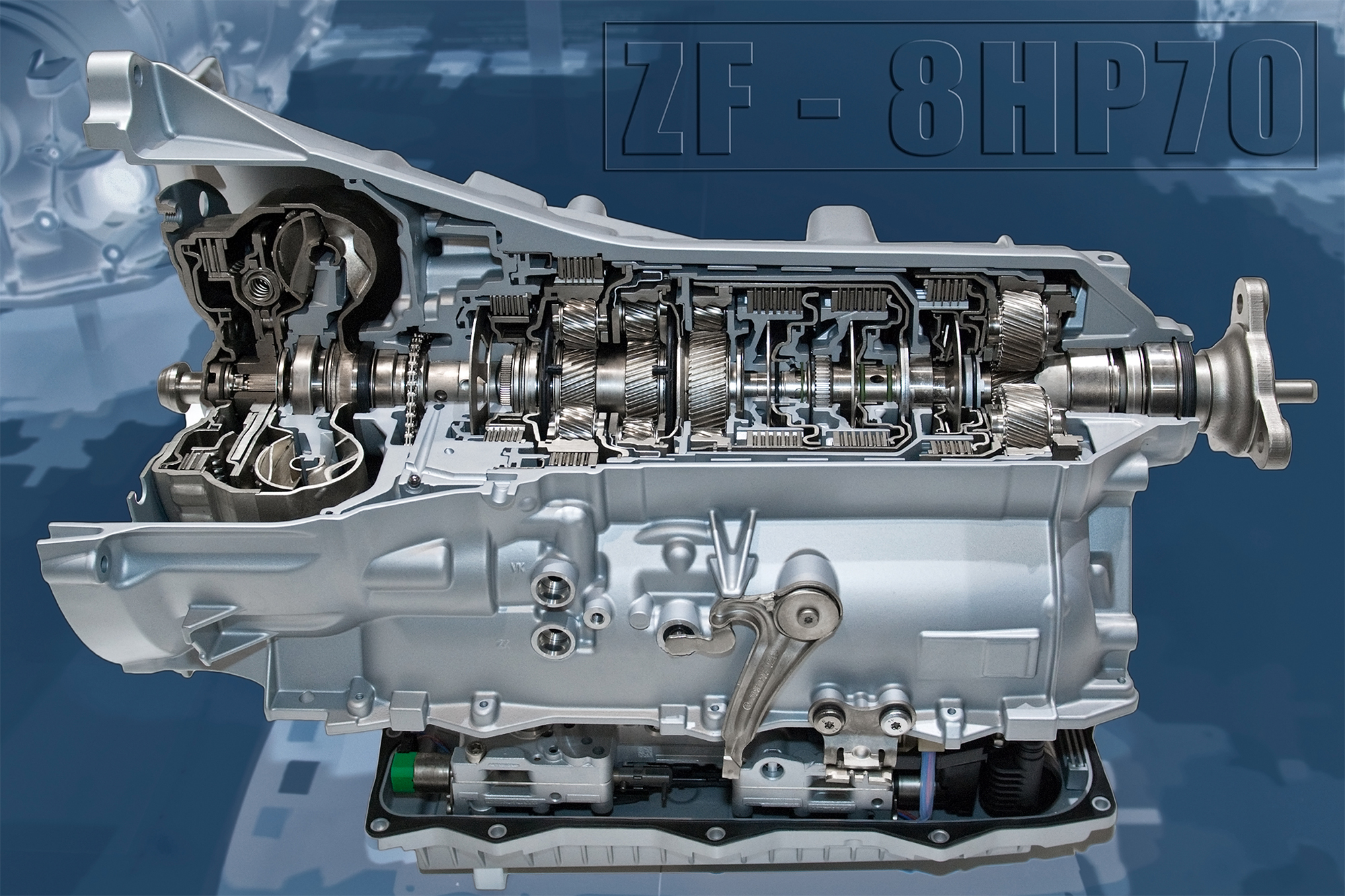 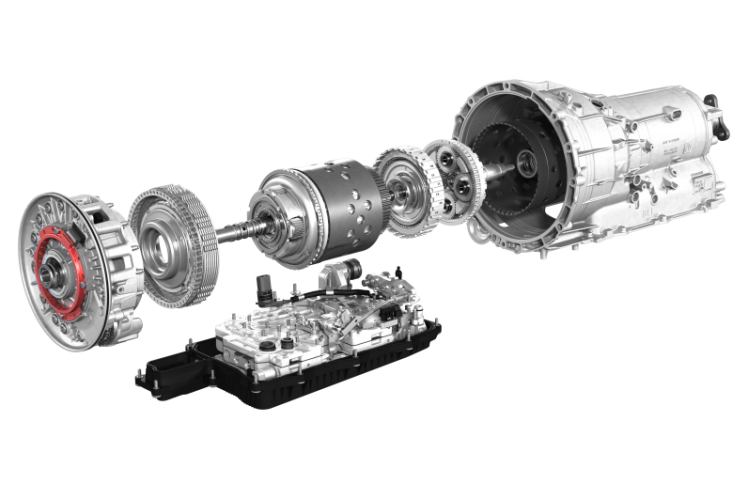 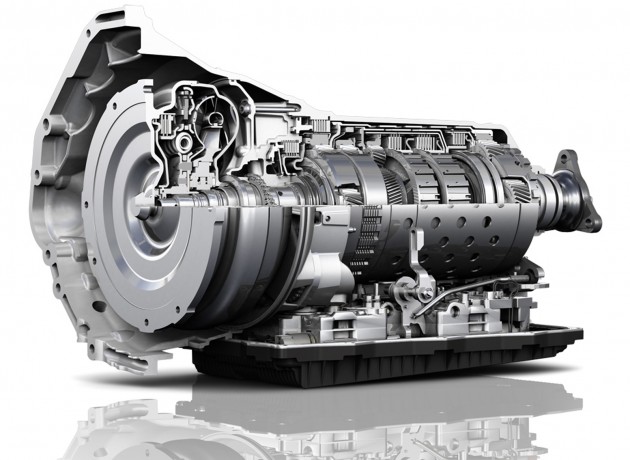